Mundanely, I am a professional search marketing strategist and writer. It's my job to investigate, find and define problems, then find ways to make them better by utilizing a variety of approaches over time. I deal in data and analyitics and a rather good understanding of how people look for solutions to their problems so that when they go looking for an answer, the one I want them to find is right in front of them. It's a process that feels as dynamic as speed walking on those human conveyor belts at the airport while you talk on the phone and scarf a snack between flights. You never stop running or changing once you start the process.

You'd think all that strategy would be extra super handy in magic - and it certainly can be - but it's not easy to change pace from nonstop running to doing something and releasing it fully. It's my job to poke things with my sharp stick and keep poking them. A witch friend and fellow marketing person has been in town and staying with us for the last few days, and we've been talking a lot about strategy, restraint, and cunning twists in magical approaches to big nasty problems. Like people create wards for the house that recharge with certain weather phenomenon or activate in certain situations, you can do things where small bits you shoal together build and expand as things progress. 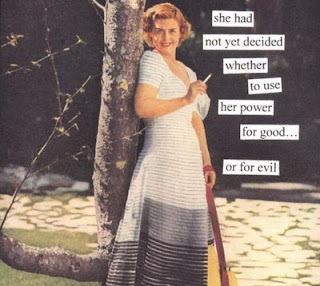 It's handy to think of this when working on relationships or interpersonal friction around the office. If I want a friend to have favor with a difficult boss at her new job, I want her to get credit for the good stuff, understanding and compassion when she messes up, and for the boss to have that quiet sense of really liking and respecting her when they interact. I can program that further so blows are softened if there are problems and opportunities for positive growth and increased responsibilities are available in a natural but accelerated way. Were I binding someone who was actively seeking to harm and manipulate as part of an abusive power game, I'd do things so that the harder they worked to do harm, the more easily their manipulations would be exposed by the people who need to be aware of them, plus the web of nastiness would turn in on them, tightening like restraints that get more constrictive the more you struggle. I want to see all that work for ill turned into good for the person they're trying to manipulate and harm.

We got a little drunk and were exploring a very old, very posh, very haunted hotel, talking about how our methods have shifted over time. Yeah, there are things every witch still needs to work on, but for the most part, we've both moved away from reactionary and panicked reactions to things toward calm, strategic, measured approaches. Aside from feeling a lot less doubt about if I took the right approach, it cuts WAY down on the odd overly-energized working that goes too far or too fast. Slow burn and honing ideal conditions is a better approach to keeping your relationship hot than, say, summoning a tidal wave of crushing lust that's neither satisfying or lasting. Better to have someone on your team who isn't pulling their weight have their eyes opened to the disparity in labor and have that realization prod them into lasting action than to grab them by the nose and force them into doing just the one task on your project. I still get what I want, only now I get what I want in a more lasting, long term way with a lot less angst and unpredictability, plus it seems to have delightfully rich unexpected benefits.
Posted by Peeps at 8:40 AM

Peeps
I'm happy, dark, and strange. Delightfully obscene. Brutal and nurturing. A tangle of juxtapositions that don't bother me in the least. I'm endlessly curious and walk a crooked path.